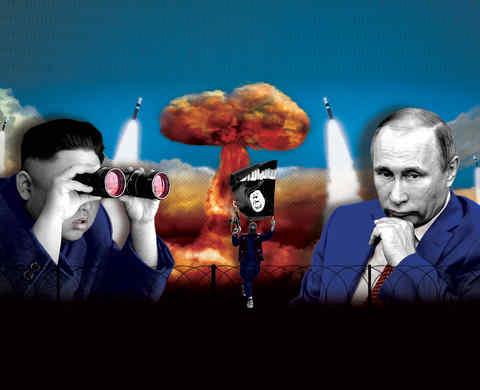 The possibility of a nuclear weapon being used in anger for the first time since 1945 is still, mercifully, extremely remote. But in 2017 the chances of it happening can no longer be discounted entirely. The inconvenient truth is that nuclear weapons are a greater danger now than at any time since the end of the cold war. The risks—from geopolitical miscalculation or from rogue actors, whether a state or terrorists—today exceed those of the late 20th century.

What characterised the cold-war balance of terror was the high degree of risk-aversion on both sides. After scares that included the Cuban missile crisis and false alarms that could have resulted in accidental Armageddon, the procedures for managing potential nuclear crises or accidents, including the famous hotlines between Washington and Moscow, evolved into a fairly effective safety net. Today that is no longer the case. When the cold war ended, those protocols withered because they were no longer thought necessary. However, the increasingly antagonistic relationship between Vladimir Putin’s Russia and the West has made such assumptions look premature, if not outright complacent. In recent years, Russia has been ever more brazen in lowering the bar regarding the circumstances in which it might threaten to or actually use nuclear weapons.

In his drive to restore Russia’s status as a great power, Mr Putin has shown himself to be a willing risk-taker. The annexation of Crimea and the covert invasion of eastern Ukraine in 2014 were a taste of how far he will go to protect what he sees as Russia’s vital interests. Moreover, he and the country’s foreign-policy clique have a paranoid fear that the West—and especially America—is determined to subjugate Russia. This combines with the contradictory belief that, in a major confrontation, the superior resolve of Russia (and Mr Putin) would prove decisive.

Mr Putin has recently taken every opportunity to remind the world that Russia alone has the nuclear capability to destroy America and that in certain circumstances it might use its arsenal. Officially, Russian nuclear doctrine is that it would resort to nuclear weapons only if it was undergoing a conventional attack that threatened the survival of the state. A more insidious version of this now appears to be accepted policy. In a confrontation in which Russia believed its vital interests were at stake, it could “escalate to de-escalate”. The idea is that Russia would use a small tactical nuclear weapon against hostile troops to show that it would contemplate a larger nuclear exchange to prevail. The theory is that leaders of Western democracies, with a much lower tolerance for risk, would force their leaders to back down.

It is in this context that Russia’s harassment of Estonia, Latvia and Lithuania, all NATO members that share a border with Russian territory and have large Russian-speaking populations, appears so threatening. The Baltic states are being subjected to Russian military aircraft probing their air defences, cyber-attacks, deliberately intimidating snap exercises near their borders, political subversion and relentless propaganda from Russian television. Unlike Ukraine, the Baltic states are of no particular strategic value to Moscow. But nothing would bring the Kremlin more joy than if they could be used as the means to test to destruction NATO's Article 5 commitment, which obliges members of the alliance to regard an attack on one as an attack on all.

The potential for a miscalculation by the gambler in the Kremlin leading to a nuclear confrontation has become much higher since Donald Trump’s election victory. In July Mr Trump sent shockwaves through NATO after casting doubt on his willingness to defend the Baltic states from Russian aggression.

North Korea represents a nuclear threat of a different kind. In early 2016 it conducted its fourth nuclear test. Since then, it has been carrying out missile tests at an unprecedented tempo, culminating in the successful trial in August (after several failures) of a submarine-launched ballistic missile and a fifth nuclear test in September—its largest yet, and evidence that it can miniaturise a warhead to fit on a missile. Japan and America worry about the increasing range of North Korea’s missiles. But a bigger concern for now should be how it may be planning to carry out an attack on its neighbour in the south that could penetrate the sophisticated anti-missile forces ranged against it.

Missile experts reckon that North Korea could put nuclear warheads on some of the very short-range systems it possesses in large quantities. If it fired multiple salvoes of missiles, mostly conventional, but some nuclear, they would be hidden from missile defences like so many needles in a haystack. To make this an effective tactic, command-and-control has to pass to front-line forces. That raises the possibility that at a time of tension, when the regime’s fears of a “decapitation strike” would be at their greatest, the nuclear threshold would be dangerously low—requiring only one jumpy field commander to give the order. North Korea’s young dictator, Kim Jong Un, may be rational and cautious. Yet there is plenty of evidence to suggest he is neither.

Finally, although no terrorist group has yet succeeded in getting its hands on a nuclear device, it would require the theft of only 0.01% of the world’s stockpile of fissile material to trigger what Harvard’s Belfer Centre describes as “a global catastrophe”. No terrorist outfit in history has had financial resources and technical capabilities that even come close to those of Islamic State (IS). As IS continues to lose territory in 2017 to Western-backed forces, the incentive to attempt a spectacularly destructive act of defiance will increase. Its chances of success are tiny, but still enough to make this the ultimate nightmare of the Western intelligence and security services on whom we rely to stop them.